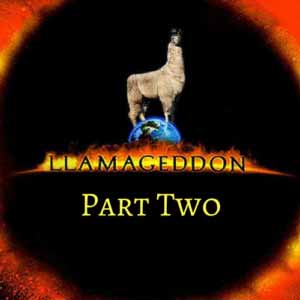 Gonad Saffron, having failed to answer God’s general knowledge question correctly has doomed the world to a fiery end. (He really should have chosen snooker.) In an attempt to save the planet, the Llamas have journeyed to ‘Sideways Earth’. Will they manage to re-forge the spare ‘Anklet of Power’ in Arnold’s Volcano? Will they evade the Devil who is determined to stop them? Will Blake the Stalker get to sing a song? And will any of it have any bearing on God’s decision to destroy the world (mostly out of boredom)?

“These guys are the ‘South Park’ of radio drama as far as I’m concerned!”

Written By: No Cause For A Llama