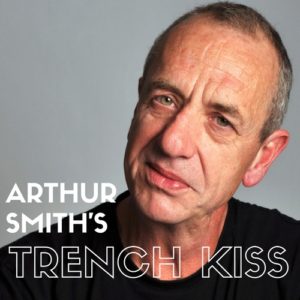 Recorded live at The Pleasance King Dome theatre at The Edinburgh Festival 2014, Trench Kiss follows Jim and Sally on holiday in Flanders. While Jim is off looking at gravestones, Sally is suddenly confronted by Jasper, a soldier who by a quirk of fate has been flung forward in time from the Great War and 1916 to the present day.

Arthur Smith is a British comedian, known for stand up, panel show appearances, and as a voice actor on The Rubbish World of Dave Spud.