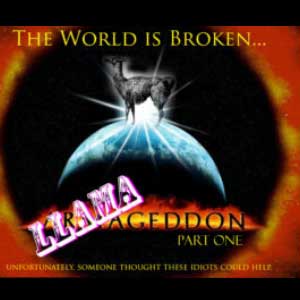 Llamageddon – Part One. The World is Broken… Unfortunately, someone thought these idiots could help. “Hear this, I have little time left and my old, frail breath is leaving me at last. It is the end of days, the end of this fragile time: judgment day. It is the time where people must pay for their actions and the sin of us all will be held to account. It will be a terrible time: a time of fire; a time of demons; of beings so monstrous they have long slumbered silently beneath green fields for countless eons until thought only something of awful legend…

Man must be ready: man will fight against man, brother against brother, angel against devil…  You have been chosen. You will need all your strength; all your mental faculties; all your unfailing, unwavering courage and, most of all, all the goodness and righteousness in your hearts…” “Sorry, I was having a lovely, big scratch. What?” “We’re screwed.”

Written By: No Cause for a Llama

Music By: Andrew Irvine (A Large Meal by Eddie Stewart)

“These guys are the ‘South Park’ of radio drama as far as I’m concerned!”