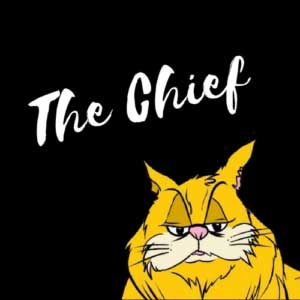 The Chief. Audio Comedy Nigel Planer stars as Oscar the 10 Downing Street cat. As recent events have revealed, the most important character in Downing Street is not the PM but the cat. In this case Chief Mauser OSCAR, the furriest of all Civil Servants, the witty and opinionated observer of all events inside and outside. Oscar keenly comments on the previous reign as the ousted PM is preparing to leave, making way for a very new regime. Wonderfully indiscreet, Oscar (Nigel Planer) reveals all….

This satirical tale of a world leader unable to accept defeat is as relevant in 2021 as it was the day it was written.

Nigel Planer has appeared in many West End musicals, and is well-known on British television for his role of Neil in The Young Ones. He takes the starring role in The Chief, playing Oscar.

“Cookson has his finger on the pulse of both American and British politics. Amazingly, The Chief was begun before Donald Trump took office… Smart, topical, pointed, pity, funny and entertaining while giving the listener things to ponder.”

“A very entertaining listen, moves along at a great pace yet remains easy to follow thanks to great writing and production. The voice acting is top notch, and I absolutely love the voice of Oscar!”

Ollie Cookson grew up in North London, Kentish Town, son of Director/Producer Cherry Cookson. As a teenager he often enjoyed writing short fiction and began to take a more serious interest in scripted work when he attended his film class at La Swap.

He went on to study Creative Writing and Film at The University of Roehampton, where his interest in scripted drama began to grow. He graduated in 2013 with a 2:1 and a newly found passion and desire to begin a career as a writer.

The Chief is his first foray into published work. It tells the story of Oscar, The Chief Mauser of Number 10 Downing Street. The Chief Mauser being a posh way of describing what is essentially the pet cat, nonetheless Oscar is always present for all the ins and outs of one of the most famous houses in the world, and on this occasion one of the biggest days in politics, the handing over of power!