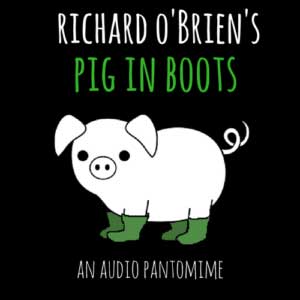 An Alternative pantomime from Richard O’Brien, the creator of the Rocky Horror picture Show. Come and join Patsy and Tom-Tom in Panto-Opolis as they travel across the country, encountering an ever-growing mix of characters while they a plan to scam wealthy victims out of their riches with a pyramid scheme based on non-existent real estate. With original music performed and composed by James McQuillian, great performances from all the actors, and live sound effects from The Foley Brothers, we think this recording has perfectly captured the personality and atmosphere of the evening. In true pantomime style we have left in all the actors fluffs, so feel free to cheer and jeer along with the audience. Laugh? You’ll positively squeal!

This is an easy to enjoy audience participation production in which the patrons are cued when and how to respond, which adds to the fun.

Pig In Boots – An alternative pantomime by Richard O’Brien

Pictures from the live performance are available in our gallery.